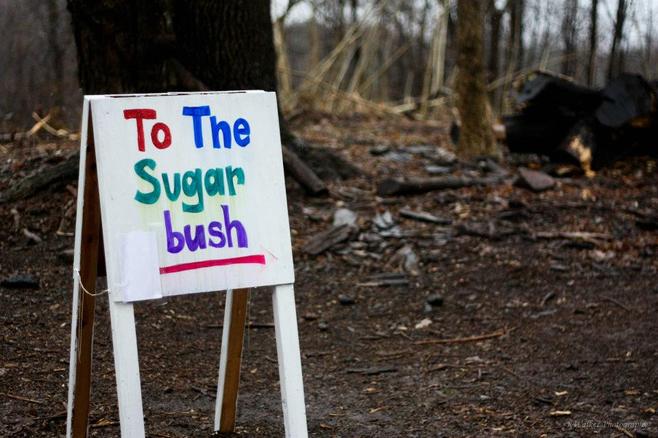 Once the trees are tapped, it is up to the weather as to when the sap will flow. In late winter and spring sap is flowing up the tree every day but freezing nights and warm days are necessary for the maple tree to yield sap for the sugarmaker. During the day the sugarmaker may check to see if the weather has been favorable for the sap to flow out of the tree. It is when the buckets and sap tanks contain sap that it is time to collect the sap from every bucket and tank, and transport it back to the sugarhouse. The task of collecting sap can have its challenges. It can be difficult to collect sap in a fresh snowfall or when the melting snow turns the ground to mud. Cold temperatures can freeze pumps, valves, hoses, and couplings. To limit these obstacles some sugarhouses are built at the foot of the sugarbush so the tubing can bring the sap from the tree directly into the sugarhouse.
Collecting and processing the sap is a critical step.  There are two basic methods used to tap the tree. The classic bucket and spout method and the pipeline or tubing method. The procedure with the bucket and spout method is a small shallow hole is drilled into the tree, a spout is tapped into the hole, a bucket is placed on a hook, and a cover is attached to keep out debris. The procedure with the pipeline or tubing method is a small shallow hole is drilled into the tree and a spout attached directly to the tubing is tapped into the freshly drilled hole. A web of tubing and pipeline runs downhill, straight, and tight for the sap to effectively flow to a holding tank at the end of the tubing pipelines. Larger syrup producers may choose to apply vacuum to the tubing. With the implementation of vacuum a sugarmaker may increase sap yield by two-fold. The vacuum stimulates sap flow from the tree and through the tubing.
Sap should be evaporated soon after it is collected. Once the sap is at the sugarhouse, the sugarmaker must quickly start the process of evaporating the perishable sap. Sap that is not boiled immediately can ferment and produce “off taste” syrup. The boiling usually takes place in a commercially produced evaporator pan that is made specifically for the production of maple syrup. The evaporator rests on top of a firebox called an arch. Many arches are wood fired while others use oil and some even use natural gas, propane, and even wood pellet chips.

The four grades of syrup are made by exactly the same process and contain the same amount of sugar. Maple syrup is graded based on color and taste:  The four classifications are:
Once the grading is complete, the syrup is packed into containers of the sugarmakers choice at 190° F and sealed immediately to prevent contamination. Product quality is critical. The entire process from collection through filtering and bottling demands the highest quality standards. As a food product, maple syrup must be 100% pure with no margin for error. Download a quality control checklist for more information. 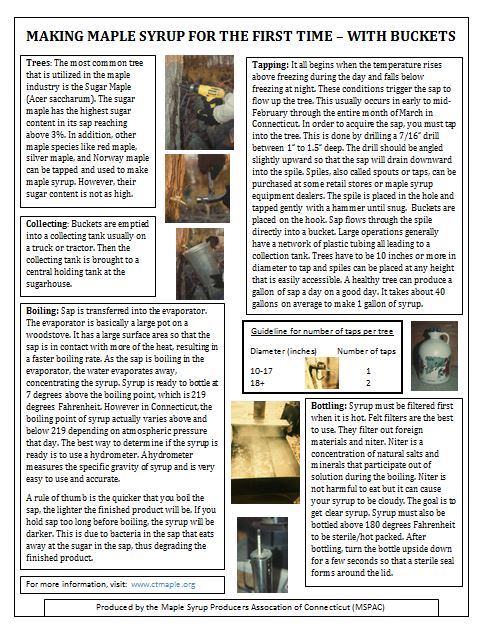 If you are looking for a handout for visitors to take, you may download the "How To Make Maple Syrup" flyer and print it out.